Wayne had to go back home on Wednesday evening, but I had one more day in Edale. After a look at the map, I decided to drive over to Ladybower reservoir, and walk up to Alport Castles. As you will see, Ladybower is a very scenic area. Alport Castles are just grassy mounds, except for The Tower which is .. well, more of a tower, really. 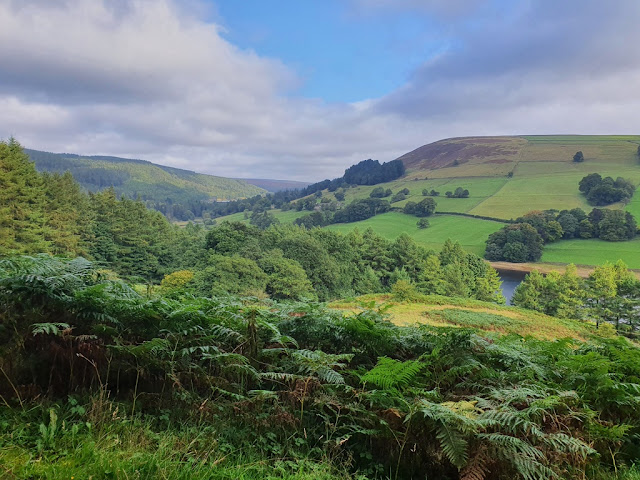 On the next morning, it will be time to drive back home so this brings my little stay in the High Peak district to its end. Nearly always, I go walking on my own; so being with Wayne this week was quite a departure for me, and very pleasant it was, too. I expect I will still carry on hiking alone, but Wayne is an excellent walking companion, and I will very happily do this again some time in the future. Thank you, Wayne. I put on over a kilo this week, but with all the walking we did, I just can't think why...

I should also mention that Wayne is a demon with the GoPro camera. He has done lots of videos, each one better than the last.  You can see them here, including two that were taken during this week. If you subscribe to his Trek Mate channel, he will hopefully become rich and famous..

As for the Peak District, there is no better walking area that is nearer to Kent. And not many anywhere.. I don't think I really was able to convey just what a magical place the Kinder Plateau can be. Edale is a cheerful, busy tourist resort, like many places in Derbyshire. But once up on the plateau and away from the main routes, it becomes a haven of peace and calm amidst a very unusual and different environment. Not perhaps to everyone's taste, what with all the bogs and heather, but I love it. I will go back again, I don't think we ever did find that elusive Kinder Summit ..

From there we found a different route back up to Hollins Cross, Back Tor and Lose Hill before returning back down into Edale. So we climbed up the dale side twice, for another reasonably energetic day with over 2,000ft of climb. The weather was again good, but cooler and more cloudy today, so visibility and therefore photographic opportunities were a bit more restricted: 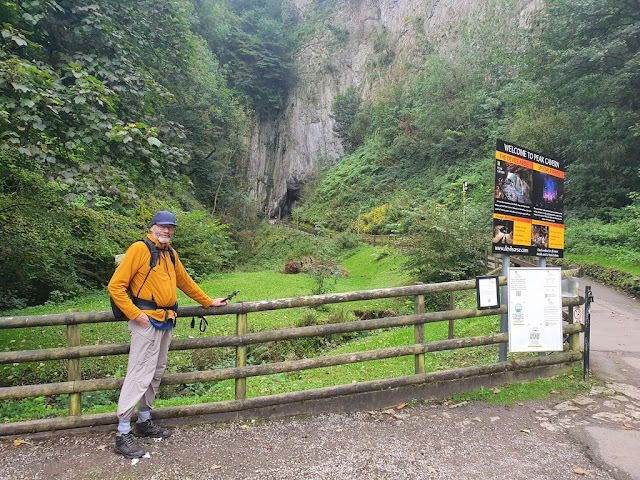 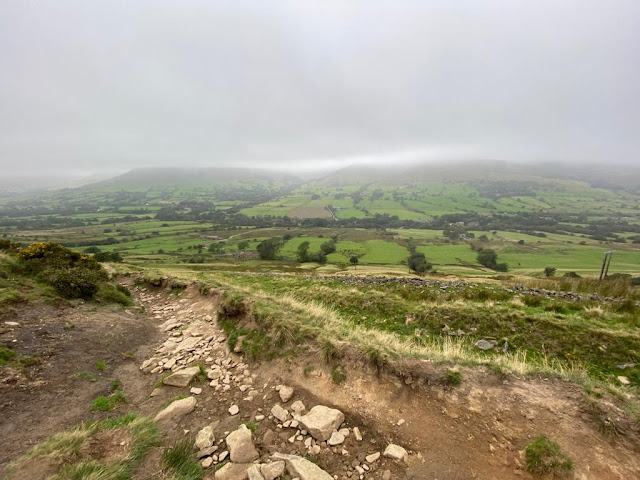 It was another good day's walking, and Castleton is a lovely little town - it seemed to be all pubs and outdoor shops, so definitely my kind of place! I forgot to take any photos while we were there, so here is a stock photo of the High St with Ye Olde Cheshire Cheese, which serves very nice beer :-) 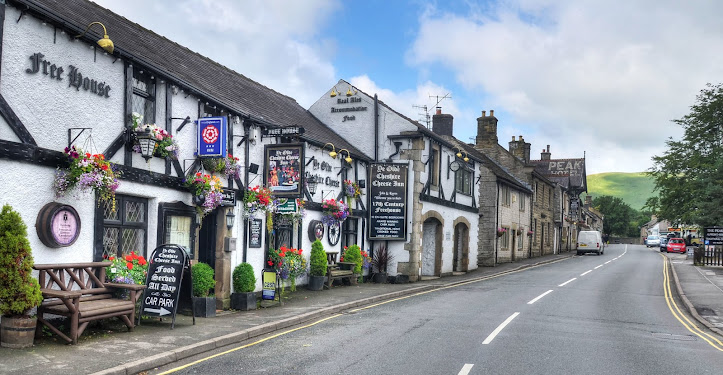 Once again, the weather was amazing, and in fact continued to be so all week. The plan for today was to go back up to the plateau again, and then to go looking for the elusive Kinder Summit, and then on to Kinder Downfall, returning to Edale via Jacob's Ladder and the current Pennine Way. And so we did, but it did make for a longish day - still less than 14 miles, but wandering over the plateau is quite hard work, picking your way around the boggy bits (if lucky :-) and through the bracken and heather.

Still we managed it OK, (but - did we really find the Kinder Summit?) and the photos below tell the tale.

.. but I now believe that was not Kinder Summit at all, but Crowden Head. A mere 632m high, when the summit is 636. That 4m makes all the difference and I may have to go back and try again, one day.

After summiting, or not, we flounder along and eventually find the river Kinder, and the path that runs alongside it to reach the Kinder Downfall. The Downfall is a waterfall that can be quite impressive at times, as when it is windy the water actually blows right back up, and makes a cloud. On the last day of my third Pennine Way last year, 2019, which I did from North to South, the weather was foul and when I saw the waterfall it was doing exactly that. Unfortunately it wasn't really possible to take a photo at the time! I was having trouble just staying upright in the wind, and the rain was driving into my face. All I could think of was reaching the Nag's Head!

Today was very, very different. No wind, plenty of sun and a very quiet waterfall .. 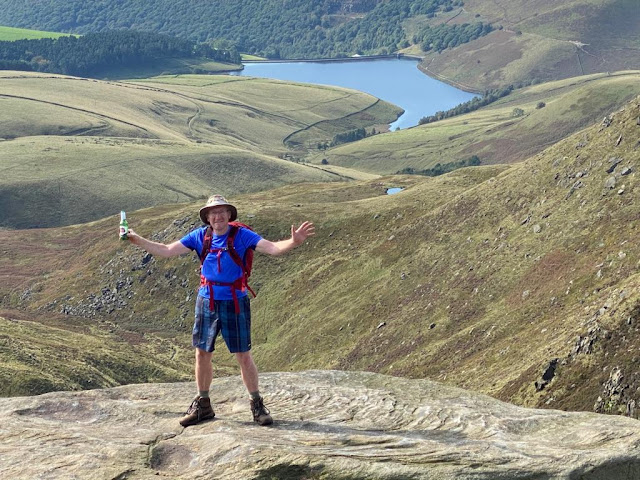 From the Downfall we followed the modern Pennine Way back to Jacob's Ladder and then on to Edale. It is a busy path...

.. but this time we went to The Rambler, Edale's other pub, which was just as welcoming (and sold much the same beer and food, being under the same ownership as the Nag's Head)

Up fairly early the next morning and set off for Edale, arriving around 9.30am. I was booked in to the Ollerbrook Barn B&B, and they had very kindly found a room for Wayne as well.  Theresa was there to welcome us, cheerful as always. Ollerbrook barn is a traditional Peak district farmhouse, not unduly chic perhaps but comfortable and welcoming. Warmly recommended.

It was still early so we left the stuff in the car and set off, straight up the hill towards the Kinder plateau. Wayne has spent much more time in the area than I have, living so close as he does, but mostly on the other side of the Edale valley, around Mam Tor and over to Castleton, so he was keen to explore the Plateau area more.

We walked up the footpath that goes up from Ollerbrook to Ringing Roger, a limestone outcrop and a bit of a local landmark.

It is quite a stiff climb up to Ringing Roger, and then a bit of easy scramble to get to the top. The views however are fine. Once we had had a look and a rest, we had a gentle walk around the plateau to a few of the local landmarks... I will let the photos below tell the story. it was a lovely day, with beautiful warm, sunny weather; and the Kinder plateau is always a special place, full of interest. It is not huge, roughly a square perhaps four miles on a side, but in the middle it is quite wild. I don't quite know how to describe it, you have to go there. So many rush past it on the Pennine Way without really noticing it, but it is a proper haven of calm, peace and remote tranquillity. You can easily get quite lost there, so make sure your navigational skills, or at least your GPS, are well tuned. Not many ever get to see Kinder Summit..

On the way back, the plan was to go to the top of Grindsbrook Clough and then follow the old, original Pennine Way back down the Clough to Edale and the Nag's Head. In the event, once we got close to the Clough it seemed easier to head straight down the hillside to it, and so we did. On the way we disturbed a barn owl, sitting in the only tree around there, and then found a small spring with lovely cool water that we used to fill our bottles. Then on to the Nag's Head, and back to Ollerbrook. 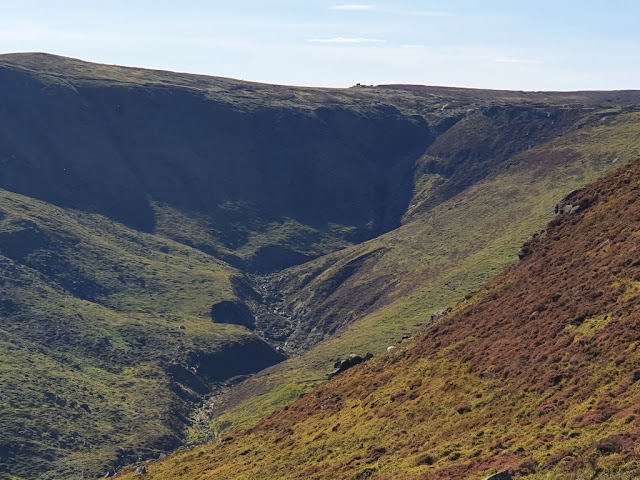