Nearly, I had a day today where everything went smoothly, just as it ought. Nearly, but not quite.
I left the hotel fairly late, about 8.45am, as breakfast only began at 8. It was mediocre, one of those that come on a tray. So no seconds, no choices.  I needed to get back up to El Serrat, so I started hitching. .  to no great effect. However about 9.10am a bus appeared, so for €1,50 I got my ride to El Serrat. I set off, and in an hour or so got to the Refugio Sorteny, where I had a coffee. Sorteny has recently been refurbished and converted into a manned refuge, and very nice it looked too. Then onward, and ever upward toward the Collada des Meners. Although this is quite high at 2,713m, the climb up to the col was steep but not otherwise difficult, ditto for the descent on the far side. So far so good, but then the weather took a hand. First thing the sky had been clear and sunny, then a few clouds appeared and we had sunny intervals, then the sun disappeared altogether. By the time I was over the col it was clear some rain was coming and so it did. It rained steadily from then until I reached the cabane, about two hours later. This cabane has two rooms, with four beds in each. When I arrived, there were a Belgian couple and a Frenchman there. Another French lady turned up later. One or two others sought temporary shelter and then carried on. There is a fireplace but sadly, no wood.
It has rained all evening and the forecast for tomorrow is bad. I am not sure what to do. . I am not at all keen to stay here a whole day. There is a manned Refugio, Jucla, roughly four hours walk from here, and if there is a break in the weather I might try to reach it. I think I can get to L'Hospitalet from there on Wednesday.
Let's see what it is like in the morning. 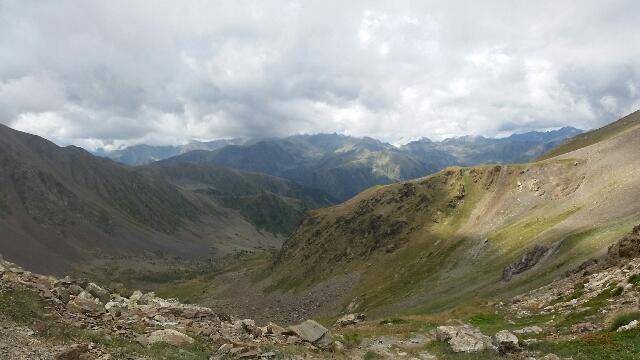 the view from the Collada des Meners, looking forward..

and looking back. Between the two pictures, you can see most of Andorra. It is wild, difficult, lonely, but magnificent country.
Posted by JerryW at Sunday, August 16, 2015