I leave the gite d'etape about 8.30am and set off towards the refuge des  Besines. My rucksack feels terribly heavy under the weight of the food I bought yesterday. Four bananas and two yogurts is more than a kilo for a start. Since I am starting at 1400m and the refuge is at 2104m I am guessing it will be a steady 700m climb and so it proves. I feel good after the rest day and glory be, neither of my knees aches.  I take my time and get there on the stroke of 12. A can of beer is €4, so I have an economical glass of wine, 250ml for €2,50, and an omelette garni. This comes with a salad, some bread and cheese which I tuck away for later, and two ripe figs cut into sections, which to my surprise taste fantastic. I have two yogurts with me, I eat one for dessert and keep the other for breakfast tomorrow.
I leave about 1pm to make a start on the next section, which is a long one. Rain is forecast for tomorrow afternoon, so I figure the more I can get done today, the earlier I will finish tomorrow. But for some reason I feel extremely sluggish. Lethargic, even light headed. It has got pretty hot, can that be it? Is it the food and wine? Am I coming down with something?  Eventually I have to stop for half an hour and doze. I feel a bit better after that but still go slowly. I am aiming for a cabane,  the Cabane de Rouzet, which should leave me about a four or five hour walk tomorrow morning. I eventually reach it about 5pm. There is a French couple in occupation, and they do not seem to want company. The cabane is small and has no windows, furniture or beds. It does not appeal, and I put up my tent next to a tiny lake 100m or so away.

There is a large herd of cows here, bells jangling. One comes close to the tent and I remonstrate with her. I point out that noisy neighbours are no-ones idea of fun. She says the bell was not her idea, and there is not much she can do about it. I suggest that she could go somewhere else, but she says she was here first, and that she weighs nearly a ton, as do her friends over there; how much do I weigh?
I retire to my tent and look for my trusty earplugs. Fortunately the noise stops when it gets dark. Presumably cows sleep too. 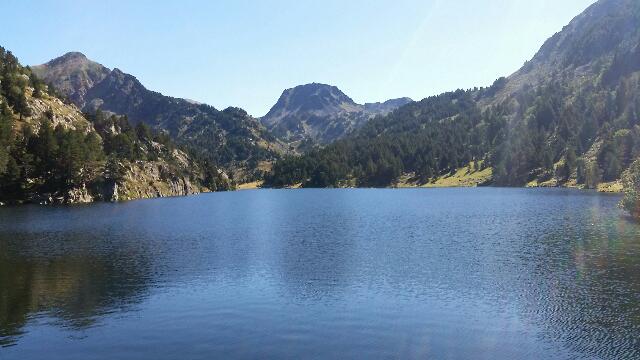 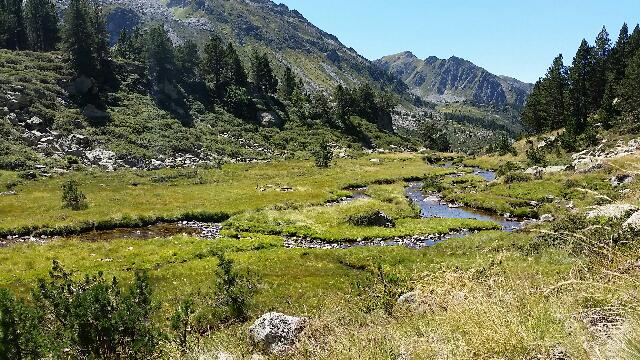 a little plateau, high up the valley. A nice place for the tent, but it is too early to stop yet. 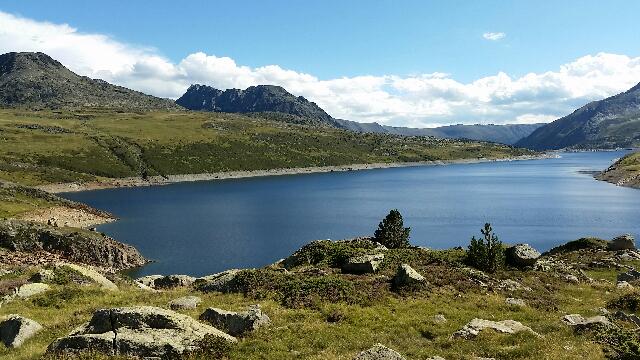 the Etang de Lanoux. it is very big, over 2km long 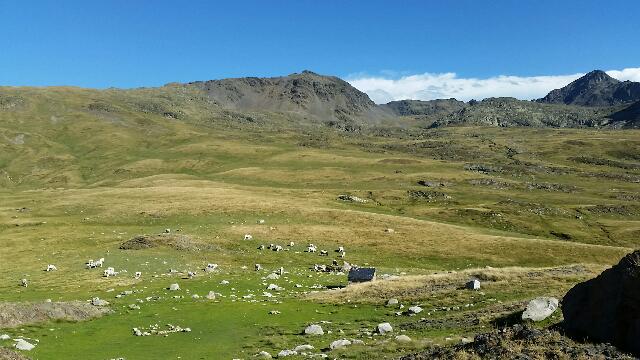 The Cabane de Rouzet.
Posted by JerryW at Thursday, August 20, 2015